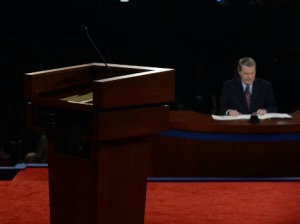 As we officially kick off another presidential debate season tonight, we will inevitably hear our candidates employ thousands upon thousands of words in an attempt to outline the problems America faces, and then a few more words offering their solutions to the problems. One can’t help but wonder, what does the ideal America look like in these mens’ eyes? The only problem they ever really seem to focus on is the economy. “My focus has always been on jobs,” one candidate remarked. Unfortunately, this view is seemingly shared by all the others as well. Is this really our great American problem–the economy? Karl Marx would certainly like us to think so. His idea of men being nothing more than mere economic animals has surely come to fruition here. But we have to resist this notion and discover what is our true American problem.

If men are focused on nothing more than the economy, morals go out the window. Morals are really the only thing that matter in a country. Everything else is made to follow. This, then, is our true American problem. We have eschewed our morals, and in their stead we have elevated worldly goods. But is this what our Creator wants to see in us? Will He be pleased when He sees us abandoning the laws that He has given in order to pursue mere temporal goods? How vain and foolish mankind has become that we now believe ourselves to be wiser than God. The laws we have been given were for our own good. Following God’s laws is the only means to achieve true happiness–this is the reason we were created. Our infinitely good Creator clearly laid out these laws for us because our poor human intellects could never discover them on our own.

But now our country has decided that we don’t need to follow these laws any longer. Our pride has conned us into believing that we are smarter than God, and that we can devise more perfect laws using our own reasoning. Is this not the exact same sin of our first parents? Human nature never changes, and we will always struggle with the notion that we know better than our Creator.

The solution? Stop pursuing worldly goods in place of God’s laws. More worldly pleasures is the only idea to achieve happiness that man can come up with on his own. So we rail about the economy and jobs, jobs, jobs. What we are too silly to understand is that if man simply followed God’s laws first, everything else would follow. Bad government is a punishment for bad people, and vice versa. If we were a good and moral people, God would bless us with a good and moral government that would accomplish everything we need from it–a good economy included.

If we really want to find a worthy candidate for our presidency, let us look for someone who is brave enough to confound the mundane talking points, and instead simply speak the truth. A true American leader should boldly denounce each and every American evil we have let permeate our society and culture, and then purpose the only real solution which is a great turning back to God’s laws. Pray that we all have the courage to make ourselves worthy of good leadership, and then to boldly defend that leadership when he stands up to proclaim the truth about our American problem.