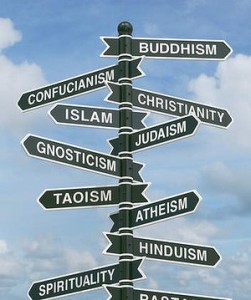 A new study has been making headlines after its authors claimed to have found that religious children are less altruistic than non-religious children. Of course the media was jubilant as commentators all across the country triumphantly claimed that the study proved religion was unnecessary and even harmful. But even if one ignores the myriad problems with the study, there is a much bigger question that lies at the heart of this religion debate.

In any discussion about the merits of religion, one has to clarify exactly what is meant by religion. The study’s authors claimed that religion as a whole is a harmful, but which religions did they study? Our Lord came to Earth to establish His one true religion, so any other religions are nothing more than man-made evil. Of course certain elements of truth can be found in nearly any religion, but this is precisely the problem. The worst kind of lies are those which contain elements of truth. There is no more efficient way to create evil than by taking what is good and true and then perverting it.

The Passion of the Christ movie illustrated this idea by portraying Satan as a parent cuddling a newborn baby. The most beautiful sight of a parent with their newborn was perverted and turned into the most ugly sight of Satan. That image is the exact personification of every man-made religion that is not the one true religion established by God Himself. How could anyone expect anything good to come from these terrible religions? Can anyone honestly be surprised if children in these man-made religions are selfish and mean-spirited? They are simply following the main tenants of any man-made religion–a disdain for the truth and a pride that places themselves above God.

We should not be surprised if adherents of these man-made religions are selfish and mean-spirited because we must realize that their religions are evil. Religion in general can be good or bad, and in fact any man-made religion is arguably worse than no religion at all. But the one true religion which Our Lord Himself came to Earth to establish is rivaled by nothing in terms of the good which it produces. Following this religion, then, is our only hope for salvation. Let us not delay in embracing this eternal truth.

6 thoughts on “Man-Made Religions are Evil”